In our blog overviewing consumer EEG, we touched upon the concept that the use case dictates the complexity, cost and inconvenience of the optimal EEG system. Today, we will be looking at one important factor that affects all three of these areas when it comes to BCI devices: the number of EEG electrodes chosen to complete the job. 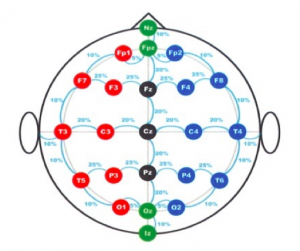 An electrode capturing brainwave activity is called an EEG channel. Typical EEG systems can have as few as a single channel to as many as 256 channels. Electrode placement on the head adheres to a formal standard called the 10/20 system or International 10/20 system. This system uses the distance from the bridge of the nose (the nasion) to the lowest point of the skull from the back of the head (normally indicated by a prominent bump—the inion) as a reference distance for a given person’s head size. The electrodes are then separated from each other either by 10% or 20% of this reference distance (first diagram). When greater resolution (what we call granularity) is required, the 10/20 system is extended where now the electrodes are separated by 10% of the reference distance (10/10). This is called the MCN system. Further resolution of %5 separation (10/5) distances adds even more electrodes to the network cluster.

The second image shows how complex an electrode network can become if higher resolutions are deemed necessary. Yet, what does higher resolution actually mean and what really gets sacrificed to achieve it? 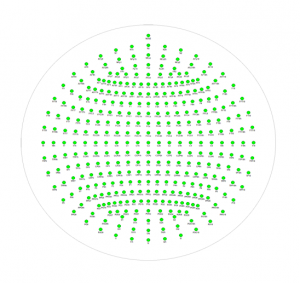 Various parts of the brain serve different functions. Placement systems like 10/20 attempt to standardize the exact positioning of each electrode (and assign symbols to each location such as Cz or P3) to access brainwave data at a specific brain location that serves a specific brain function(s).  For example, placements Fp1, Fpz and Fp2 collect important prefrontal cortex data which acts as an “executive” for the decision making process, weaving past events to present experiences in order to make the best choices. Placements at F7, F6, F5, etc. capture frontal lobe data associated with the choice of good and bad decisions, the suppression of socially unacceptable responses, and determining similarities and differences between events and things.

There are several purposes for using larger electrode arrays (dense array EEG) that include1:

So the advantages to multi-channel EEG systems, especially as the sensor network is expanded to more channels, is that they do a better job avoiding the loss of any crucial data (caused by when electrode distances grow further apart when fewer are deployed) and in detecting important clinical signals. What this means is that medical use cases need higher resolution EEG systems (larger sensor networks) to get the job done.

Meanwhile, consumer EEG / BCI can afford to ignore a lot of the data that was considered crucial to a medical application, and in doing so can scale back the number of channels used. How far can it be scaled back? The answer is, as you may have guessed, “It depends on the use case.” In our upcoming blogs, we will see how scaling back the number of EEG channels supports crucial headset form factor advantages in the consumer BCI world. 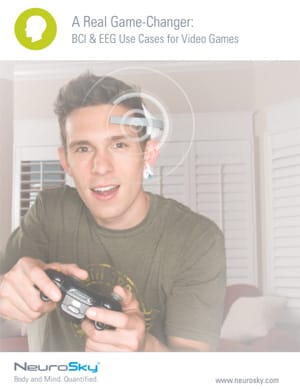