Communication is movement. Whether you’re speaking, signing, writing, typing, or texting, communication from person to person is dependent in some way on the movement of the body. So, what happens when someone can no longer move their body?

Diseases like ALS, serious injuries, and other types of trauma can cause locked-in syndrome, which is a condition in which the person affected can no longer move most or any of their voluntary muscles. Locked-in syndrome renders the patient completely speechless, which is emotionally devastating—the person’s brain remains fully functional, but he or she can no longer communicate with caretakers and loved ones.

MindScribe—a communication device powered not by muscles, but by brainwaves—aims to unlock locked-in people and restore their power to communicate. There is no cure for ALS and no standard treatment for locked-in syndrome, but patients’ quality of life can be astronomically improved by giving them the ability to communicate.

Amyotrophic Lateral Sclerosis (ALS), sometimes called Lou Gehrig’s Disease, is a neuromuscular disease which tends to progress very rapidly post-diagnosis. ALS attacks the neurons which transmit signals between the brain, the spinal cord, and the muscles. ALS causes these nerve cells to die, paralyzing the muscles. As time progresses, the patient’s muscles atrophy due to complete lack of use.

Right now, there is no cure for ALS. Some treatments have delivered promising results and can extend the lifespan of those diagnosed with ALS while delivering a better quality of life. However, only 10% of people diagnosed with ALS live ten years or longer after diagnosis and the average survival time is 3 years.

People with ALS most often retain all of their senses and full use of their brain. In some cases slight cognitive impairment is detected, however, most ALS patients are not intellectually affected by the disease. Despite this, ALS will rob them of their ability to swallow, speak, and eventually breathe as it progresses.

MindScribe: A Communication Device for ALS and Locked-In Syndrome 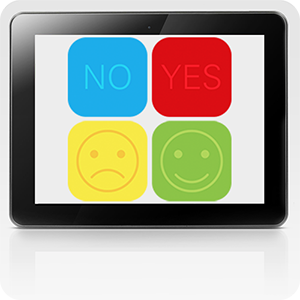 MindScribe is an exciting new development in the world of ALS communication devices. Many communication devices exist, but are dependent on the user having some motor function available to them. For example, some devices can be controlled with the twitch of an eyelid or a slight movement of the hand or another muscle. As ALS progresses, these motor functions become less and less available. 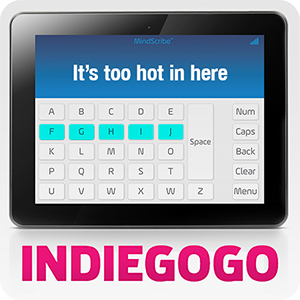 MindScribe does not require the use of any motor functions to operate. Rather, it works by reading EEG brainwaves and, with the use of an accompanying app, translating them into messages. It represents a breakthrough in ALS communication devices: a solution which can unlock completely locked-in patients.

The MindScribe app is a brilliant piece of software which interprets electrical signals from the brain. These signals are detected using a sensor which rests gently on the forehead. The user’s brainwaves control features within the app.

Right now, MindScribe can interpret brainwaves to represent four different messages: yes, no, happy (or positive, excitement, etc.), and sad (or negative, discomfort, etc.). This version of MindScribe has been tested extensively for the past for years in Japan by its creator, Dr. Musashi Honma. Dr. Honma currently cares for over 2,000 ALS patients.

The next version of MindScribe will allow the app to translate brainwaves into more complex messages. A typing function will be available along with pre-programmed common phrases and emergency messages.

Why is MindScribe So Important?

MindScribe is an extremely important breakthrough for people with ALS and other conditions causing locked-in syndrome, as well as their loved ones. Having full control of your mind without being able to communicate is one of the greatest hardships a human being can be subjected to. Conversely, it is exceptionally difficult to see someone you love lose control of their body and become unable to communicate.

The next version of MindScribe will allow locked-in people to unlock their ability to communicate. If they are uncomfortable, hungry, happy, tired, or excited, they can communicate these feelings to their caretakers or loved ones. They will be able to express their feelings, thoughts, joys, and sorrows. The ability to communicate with each other is one of the fundamental things that makes us human, and we hope MindScribe will restore feelings of humanity and dignity to its users.

Because of MindScribe’s incredible potential to change the lives of its users, we’re partnering with Dr. Honma to bring this newer version of MindScribe to the people who need it more quickly and efficiently. We will also bring it to market for much, much less than traditional ALS.

Sign up below to be one of the first to know when we launch on Indiegogo!